Rose hips are actually the fruit of the rose plant and usually form in late summer and autumn, after the rose plant has beenpollinated. Once the rosebud falls off, many people forget about roses, but the fruit of the plant is yet to come! The color is typically red, but it can also be orange, purple, or black. They are some of the most nutritionally packed fruits of any plant, which is why they have become such a desirable and sought after product in markets around the world. Historically, rose hips have been used for hundreds, if not thousands, of years by cultures such as the early populations of the Americas, as well as various parts of Europe. 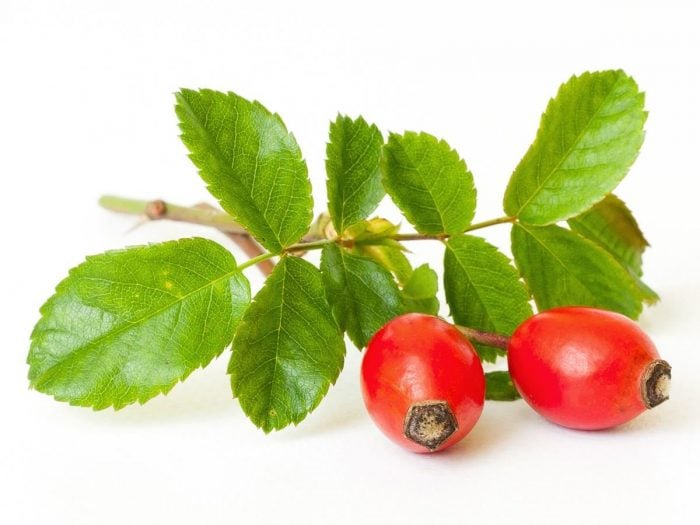 They were cultivated for a number of reasons, even as decoration due to their shape and color, but it wasn’t until recent decades that the complete medicinal value was actually discovered. They were even used as pet food for certain types of animals, because it was noticed that animals were particularly attracted to the scent and taste of these small fruit pods. When people began eating the components of rose hips, a great deal of attention shifted towards the potential that it had for our health.

The variety of ways in which rose hips can be used is impressive. Some of the most common forms of rose hips include jams, jellies, soups, tisanes, bread, wine, pies, and even marmalade. It is an extremely versatile ingredient that is enjoyed by people all around the globe, either due to its delicious flavor or for its nutritional benefits!

The reason that rose hips are so popular is because they are extremely effective in treating a wide variety of health conditions. How? The vitamins, minerals, organic compounds, and other essential nutrients in rose hips give it a very powerful punch! Some of these beneficial components include vitamin C, vitamin A, vitamin E, and B-complex, as well as minerals like calcium, iron, selenium,manganese, magnesium, phosphorous, potassium, sulfur, silicon, and zinc. Furthermore, the organic compounds, such as lycopene, pectin, lutein, beta-carotene, are also very powerful and essential to the body. The antioxidant components, which include flavonoids, phytochemicals, and carotenoids also contribute to the health benefits, which are explained below.

Prevents Cancer and Chronic Diseases: The carotenoids, flavonoids, and polyphenols that can be found in rose hips are verypowerful antioxidants, which eliminate or neutralize free radicals that are found within the body.

They are the byproducts of cellularmetabolism, and can damage healthy cells by causing them to mutate into cancerous cells, or simply killing them off. Free radicals or a lack of antioxidants is connected to a number of serious conditions, including cancer, heart disease, and premature aging. The wealth of antioxidants in rose hips are particularly adept at keeping the body healthy from all angles.

Lowers Cholesterol: Some of the organic compounds and antioxidant components in rose hips also reduce the cholesterol content in your body, thereby reducing strain on your cardiovascular system and also seriously lowering your chances of suffering a stroke or a heart attack.

Immune System: Rose hips have an impressive amount of vitamin C, which is one of the best methods to boost the immune system. Vitamin C stimulates white blood cells and is also essential in the prevention of asthma and the general health of the respiratory system. This can be seen in the reduction of respiratory conditions such as cold and flu through the intake of rose hips and its high levels of vitamin C.

Diabetes Management: Rose hips have been shown to strictly regulate the blood sugar level of the body, which is very important for people suffering from diabetes. By keeping the balance of insulin and glucose in the body, rose hips can prevent the sudden plunges or spikes in blood sugar that can be so deadly.

Diuretic Effects and Digestion: The various acids within rose hips, as well as pectin, are known to induce urination and excretion.As a diuretic, rose hips can help eliminate toxins from the body, as well as excess salts, liquids, and even fat. By stimulating bowel movement, rose hips can help a person avoid a number of unfortunate health conditions and discomforts. Generally, rose hips are detoxifiers through and through!

Skin Care: People all over the world want their skin to look more beautiful, blemish-free, and youthful. There are hundreds of products and potential treatments for tightening and toning the skin, but rose hips are one of the best options. The astringent quality of rose hips keeps the skin elastic, so it doesn’t develop wrinkles, flaws are easily eliminated, burns and scars quickly heal, and your skin looks younger and more vibrant.

Circulation: Rose hips have a significant amount of iron, which is an essential component in the creation of red blood cells. Therefore, having an adequate amount of rose hips in your diet can prevent anemia and also keep your essential organs well-oxygenated, increasing metabolic activity and optimizing functionality of various organ systems.

Bone Health: One of the most important roles of vitamin C, although it is one that is often overlooked, is its essential role in producing collagen. Collagen, along with the other important minerals found in rose hips, can help prevent osteoporosis by maintaining bone mineral density well into your old age, keeping you strong, flexible, and able to live an active life!

Words of Caution: There are no known issues with using rose hip whenever you want, although there are scattered reports about nausea, vomiting, headaches, heartburn, and an inability to sleep. Much of this could be due to slight food allergies. As always, pay attention to your body and act accordingly!

Advanced Search
My Cart
Your shopping cart is empty
RECOMMENDED